Some of you might know the BusyIndicator from the WPF Toolkit or from Silverlight.

I was using this control in Silverlight to disable user interaction while the application was performing some long running operations. This makes it really easy to make sure the user will not start a new task while another has not yet finished. And – very important – it does not block the UI thread, so the application does not seem to be unresponsive to the operation system.

Microsoft does not offer such a control for Windows Store apps. But even in a Windows Store app I needed to make sure the user ‘waits’ for the completion of a task, before a new is started. And I do not wanted to implement this by adding a flag telling no new task can be started (and/or disable controls based on that flag, …).

So what I wanted was a control that meets the following requirements:

Disabling the user to interact with the app is quite simple. Rob Caplan gave me the initial idea in his answer on how one might implement a modal popup. He suggested to use a full screen popup with a similar look to the MessageDialog.

Creating a full screen popup, or better say a popup having the current size of the app, and setting the focus to that popup, no interaction with the app is possible any more. No matter if the user clicks, taps, or uses the keyboard or pen.

The first requirement is fulfilled.

Depending on how the full screen popup is implemented, the user might not recognize that the interaction is disabled.

Looking at MessageDialog, one might notice that the area that is not covered by the dialog itself is dimmed out.

To achieve this, a UserControl is implemented. In the sample code, this user control is named BusyIndicatingDialog and can be found in UI/Xaml/Popups.

BusyIndicatingDialog contains one Grid without any content. This Grid has a black background and an opacity of 0.4.

Setting an instance of BusyIndicatingDialog as the child of the Popup, the app’s window gets dimmed out when the Popup is opened. The second requirement is fulfilled.

Do Not Block the UI Thread

Because common UI controls are used, this requirement can be fulfilled without any additional effort.

Of course, one has to take care that the operation to be performed is non-blocking. Means it should be implemented in an asynchronous way. But this is independent from the implementation of the BusyIndicatingDialog.

Now, the user sees that the interaction is disabled. But there is no information about what is going on. This might lead to the impression that the app has stopped working.

To show that there is something going on in the background, BusyIndicatingDialog contains a second Grid. It is something like a modal dialog, showing the current processing state. It contains some TextBlocks and a ProgressBar.

These controls are bound to a view model, implemented by BusyIndicatingViewModel. This class can be found in ViewModels.

BusyIndicatingViewModel implements an event handler, OnItemProcessed. The class that implements the long-running operation, MainPage in this sample, needs to fire an appropriate event every time an item is processed (or when an update of the progress should be displayed). This event is implemented by MainPage.ItemProcessed.

And because BusyIndicatingViewModel implements the INotifyPropertyChanged interface (via its base class BindableBase), setting the properties in OnItemProcessed updates all the controls of the dialog.

So far, we are able to stop user interaction with the app, give visual feedback on this, do not block the UI thread, and show how the operation proceeds. But maybe the user wants to cancel that operation, for whatever reason.

To enable the user to do this, a cancel button is added to the BusyIndicatingDialog. Pressing this button, the Cancel event is fired by the BusyIndicatingViewModel. This is implemented by binding the Command property of the Button control to the CancelOperationCommand of the view model.

This feature makes the BusyIndicatingDialog ready to use.

The following code snippet shows all the steps that needs to be done to show the busy-indicating dialog.

Because there are several steps to be done before the long running operation can start, this is encapsulated in a separate method.

Please notice the fact that the app bar is disabled explicitly. The popup does not ‘block’ the app bar.

When the long running operation has finished, some cleanup is required.

I consider this implementation to be useful in cases where many items (or tasks) should be processed sequentially, while the processing of each single item does not take too long. Having one task that takes very long, no progress can be displayed and no cancelation is possible. If you have to cover such a scenario, I think you need to find another solution.

One thing really important is to give the UI thread a chance to update the dialog control and react on user input. To do so, you should add an await Task.Delay(1); between the processing of each item. Otherwise, in case the processing of the single item is really fast, the dialog might not be updated and(!) pressing the cancel button does not have any effect.

In the article “The Windows Store App Lifecycle“, Rachel Appel points out that “Windows 8 is changing how and when applications run”. In fact, it does!

Unlike desktop applications, Windows 8 suspends Windows Store apps (after a few seconds) when the user switches to another app. No matter what the app is currently doing. You cannot keep the app ‘alive’.

One should be aware of this. It means the user has to wait for long running operation to complete, and should not switch to another app meanwhile. This is kind of ‘blocking’ the device. Keeping this in mind, one should think twice before using Windows Store apps to execute long running operations, e.g. copy gigabytes of data.

Yes, there are background tasks available. But you cannot trigger them from within your app. So the usage is limited.

… can be found here. 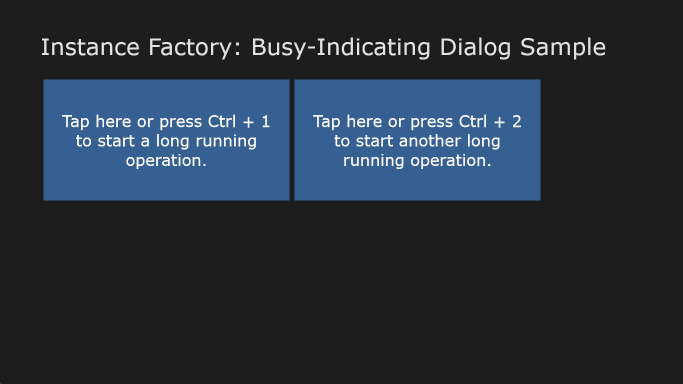 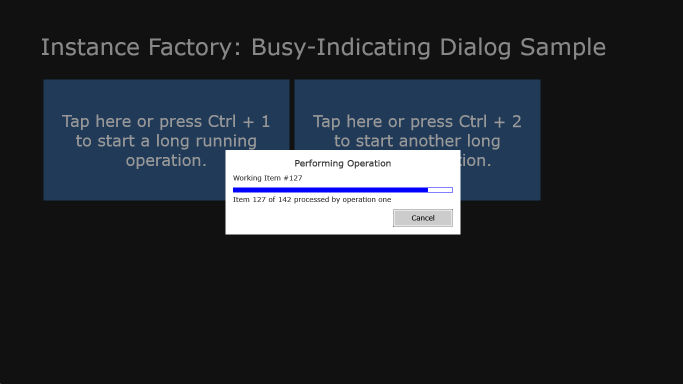 Simple and Generic ICommand Implementation for Usage in XAML