After creating the Azure virtual machine having the features backup, recovery, and antimalware protection by just clicking in the portal, plus doing a site failover test and site failover, I ended up with an unexpected high number of resources.

Here is what I found. And just in case: before publishing this post, all resources were deleted. 😉

In case Azure Site Recovery / Replication is enabled for a virtual machine, replication creates several containers within the configured cache storage account. From what I saw, the number of containers seems to be somehow connected to the number of disks of the VM. But there is no 1:1 relationship. For my virtual machine having the OS, temporary and data disk (overall three), seven containers were created. Having a VM with OS and temp disk only, I found five cache containers.

I was not able to find any connection from a container to the virtual machine. This means, in case one storage account is used to keep the replication containers of multiple VMs, it is impossible to say which container belongs to which VM. This is a serious problem when one, but not all, of the VMs should be deleted. Which containers has to be deleted then?

For test purposes, I deleted all while the VM was running. Deleting them was not a problem. To no surprise, replication had some issues then. I had to manually resync the VM.

Accordingly, I highly recommend to have exclusive recovery storage accounts per virtual machine to ease housekeeping.

By default, when you open the “All resources” list, the portal does not show the resources created/managed by Azure. Microsoft calls these resources “ancillary”. To see really all resources connected with the virtual machine, one need to checkmark the “Show hidden type” option.

If you want to see the hidden types included in a resource group, you need to first click on the “Clear filters / Show hidden” button after opening the resource group in the portal. This will then show the “Show hidden type” option. 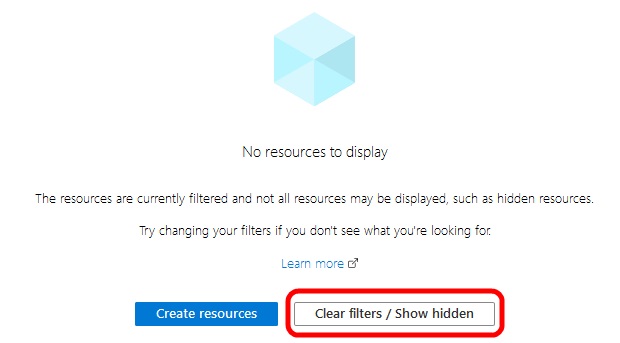 These were the hidden things I found:

In total, five resource groups, twenty-five resources (six of them hidden), and ten blob containers were created by me or Azure to setup the virtual machine. And this is before following the security recommendations given by the Azure Advisor.

Comparing this with the minimum list of resources created based on Microsoft’s tutorial “Compile a checklist for creating an Azure Virtual Machine“, this is surprisingly much of resources.

The post “Minimum required Elements for Microsoft Azure VMs” presents the list of elements I identified as the minimum.